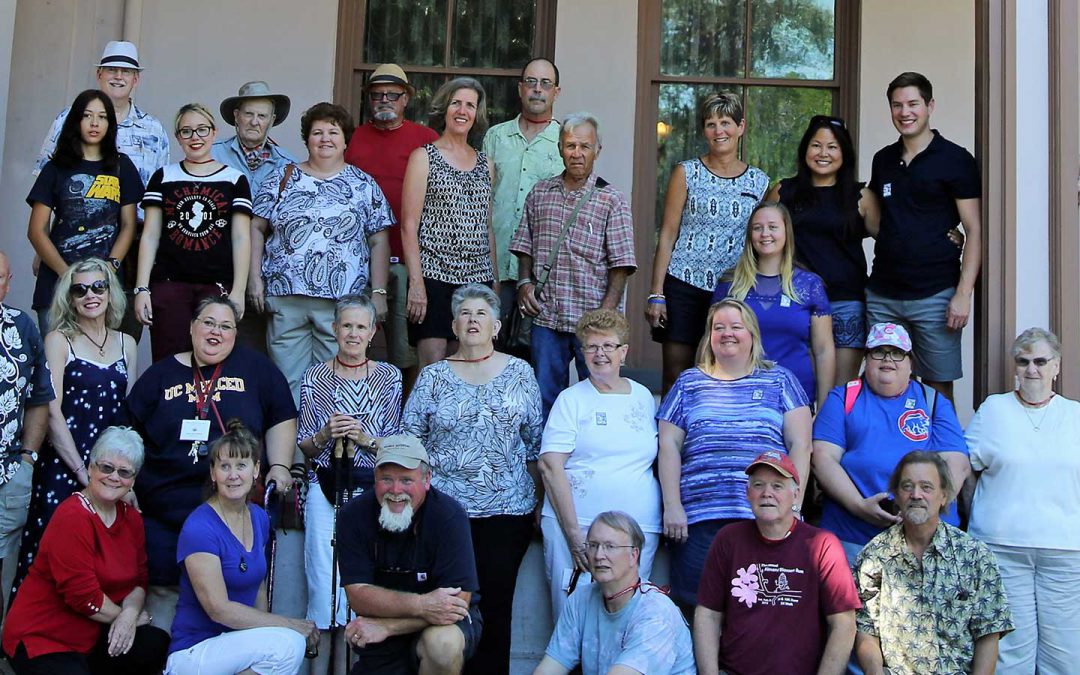 On July 21, Bidwells began arriving in Chico, CA for the 2016 BFA Reunion. There were 32 attendees from eight states and 12 first time reunion attendees. Oxford Suites in Chico served as the reunion hotel offering the attendees wonderful accommodations, delicious breakfasts and an evening reception which allowed Bidwell cousins to catch up with familiar cousins and get to know new cousins who were attending their first BFA Reunion.

Activities began after the Board of Directors meeting on Friday, July 22, with a delicious “Burger Bar” lunch at the Madison Bear Garden in downtown Chico. “The Bear” as the locals refer to Madison Bear Garden is located in the former “Lusk House”. The building was originally the home of John Bidwell’s attorney, Franklin C. Lusk.

After lunch, we gathered at “Bidwell Presbyterian Church” for our afternoon tour. A wonderful guided tour was provided by Marcie Anderson, Officer Manager for the church. We learned information about the building, the previous location, the congregation and its outreach into the community of Chico, and the recovery of the church after the devastating fire of February 13, 1931. We were honored to see the “Bidwell Memorial Window” which was remarkable saved from the fire probably due to the fact that it was on the opposite end of the building from where the fire began.

Friday evening the Bidwell cousins had time on their own to explore downtown Chico and have dinner at one of the wonderful restaurants in Chico.

On Saturday morning we were off to what was the most anticipated tour of the reunion, a visit to the home of John and Annie Bidwell…the Bidwell Mansion!

Greeted by the wonderful staff of the visitor’s center and the CA State Parks department guides, we enjoyed a guided tour of the mansion and grounds. The mansion staff went out of their way to make us feel welcomed.

Our BFA General Business meeting began the activities for Saturday evening. Officers were sworn in during our installation ceremony, led by BFA Director, Sandy Maslen. Bidwells who passed away since the 2015 reunion were remembered with the memorial list reading by BFA Director, Linda Jakubowsky. A delicious buffet dinner followed our business meeting.

After dinner, newly elected BFA Director and local Chico resident, Edward Wilhelm, gave a wonderful presentation of how he discovered and traced his Bidwell roots to General John Bidwell of Chico!

A tour of the Chico Air Museum began activities for Sunday. The air museum is located at the Chico Municipal Airport in what is said to be the first hangar built at the Chico Army Air Field which operated from 1941-1945. We were given a guided tour by extremely knowledgeable guides. Airplanes, helicopters, and more were on display for all to see.

After lunch in the tap room of the Sierra Nevada Brewery, our group began its last activity with a guided tour of the brewery. Established in 1979, Sierra Nevada Brewing is one of the top breweries operative in the United States. Our tour showed us the beer making process from the hops to the final product. The end of the tour was spent in the “tasting” room allowing attendees to sample six different brews from the brewery.

We were welcomed warmly by the residents of Chico. Our reunion was highlighted on two different TV stations in the Chico area and featured in the Chico Enterprise Record newspaper.

On Monday, some reunion attendees headed back home and others continued traveling to new and exciting places. We left with fond memories of the time spent together with Bidwell cousins in the town that was founded by John Bidwell!