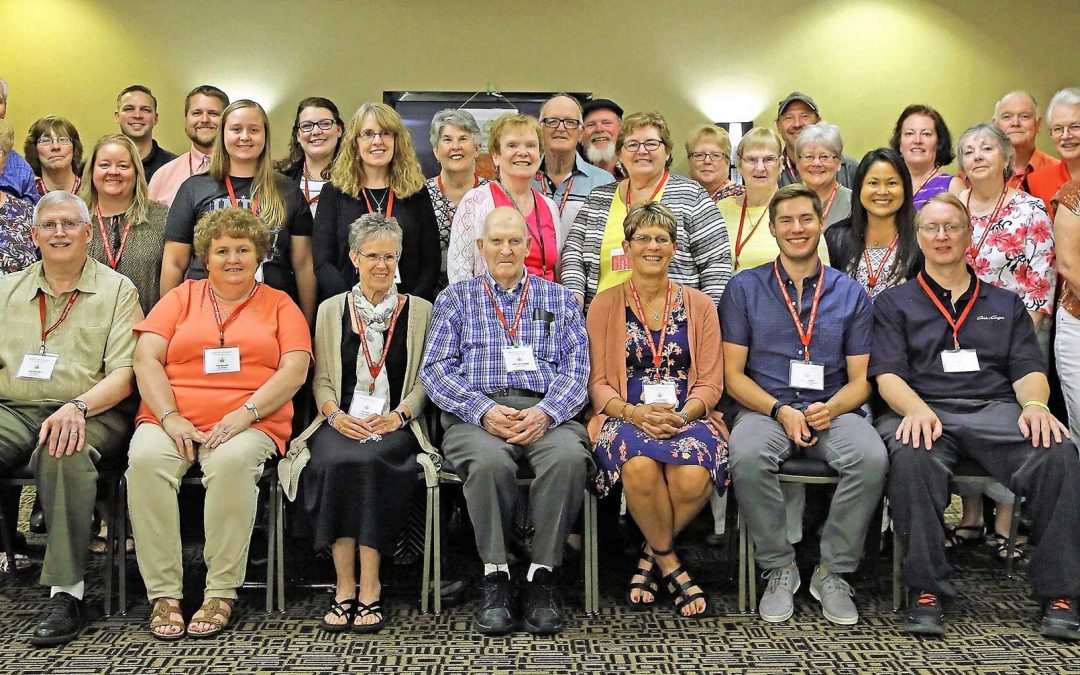 The very first Bidwell Family Association Reunion in the state of Indiana, was held from July 13 —17, 2017. First time reunion attendee, Debra Warboys, served as our reunion host welcoming us to the state capital city of Indianapolis. Cambria Suites was our host hotel offering us wonderful accommodations, delicious food with a very friendly staff. Thirty-seven Bidwell cousins from 12 states and Ontario, Canada attended the reunion.

After lunch, we boarded our bus and we were off to the Indianapolis Motor Speedway for a behind the scenes tour. Our tour guides, Steve & Paige, gave us an informative tour with access to Winner’s Circle, the media center, a luxury suite, and a driving tour by the famous garages of the speedway. After our tour, we had free time to explore the museum and gift shops. Even those Bidwells who were not race fans, noted that they enjoyed the tour very much and everyone was impressed by the size of Indianapolis Motor Speedway! Although a Bidwell has never won the Indianapolis 500 or NASCAR’s Brickyard 400, a car owned by James C. Bidwell and driven by Jerry Sneva came in 10th place in the 1977 Indianapolis 500. The #36 car was a McLaren M16A Offenhauser 159 ci turbo named “21′ Amendment”. There seems to be Bidwell history no matter where we travel!

On Saturday, we visited-the Indiana Historical Society in downtown Indianapolis. The self-guided tour allowed us to explore the museum at our own pace. After a short film presentation about some of Indiana’s history, we ventured into the “Cole Porter Room”. A beautiful vocalist sang some of the most beloved Cole Porter songs for our listening pleasure. The songs were so inspiring that John-Jack Bidwell & Sandra Maslen found themselves spinning around the dance floor!

One of the highlights of the museum was the “You Are There” exhibits. We stepped into another era as we walked into the picture of such events as the 1948 Ball Canning Company, 1943 Italian POW’s at Atterbury, and the life of Eli Lilly. Being able to interact with “actors” from the time periods made the experience very unique. After lunch at the “Stardust Terrace Café”, we had free time to explore the canals of Indianapolis and visit the moving 9-11 Memorial.

Saturday evening the BFA Business meeting was held at the hotel. During the meeting, Amy Misawa of Los Angeles, California was voted in as a new BFA Director. The 2017-18 BFA Officers were sworn in during the Installation ceremony lead by BFA Director, Sandra Maslen of New York. The list of those Bidwells who have passed away since our last reunion was read by BFA Director, Linda Jakubowsky of Iowa.

A delicious buffet dinner followed our business meeting. Our dinner prayer was offered by BFA Director, Julia Bidwell of Ohio. After dinner, BFA Director, George Bidwell of Canada served as our auctioneer with assistance from Taylor Hall of Iowa. We had a very successful auction due to the generous donations of items to auction and the aggressive bidding by the attendees!

The Soldiers & Sailors Monument is Indiana’s official monument to the Hoosiers that served in the Revolutionary War, the War of 1812, the Mexican War, the Civil War, and the Spanish-American War.

Standing at 284ft 6 inches, it is only 15ft shorter that the Statue of Liberty. Some energetic Bidwells climbed the 331 steps to the top observation deck, others rode the elevator 90% of the way and climbed the last 31 steps, for a panoramic view of the city of Indianapolis.